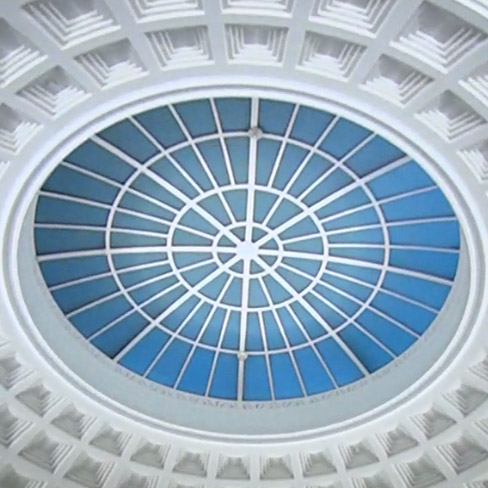 or, The Museum’s Lost Soul

On the closing and denuding of one of the venerated museums in Washington: the Corcoran Gallery of Art.

The art in the Corcoran’s Flagg Building had been part of Washington, DC culture since 1897. From Wiki:

I was a part-time and full-time professor at the original Corcoran College of Art+Design for 7 years. Then the recession hit;  the gallery’s donations and endowments dried up; the college closed; the art was confiscated; the institution itself repurposed.

How did this piece come about?

One time my band was playing at the original 930 Club on F Street. Before the show I was wandering through the National Portrait Gallery nearby and I missed the museum’s closing announcement.

Suddenly finding myself lost and locked in the Portrait Gallery with the over-heads clicking off, I hurried through empty rooms and corridors past hundreds of staring faces refusing to tell me how to get the Hell out before I missed the gig. Finally a security guard saw me and kicked me out.

I remembered that moment when photographing this piece, thinking about the convulsions of a ghost having a nightmare, trapped inside the Flagg Building looking to get out.

The museum now is mostly emptiness and scaffolding – large spaces and labyrinths of horizontal and vertical behind-the-scenes passageways disclose abandoned student work amid debris in shadow and reflection and stories-obscuring billowing sheets. Late at night after class there’s nobody there.

Parts of the gallery’s gutting are almost matchlessly lovely but evoke a mausoleum. I found myself thinking about the ballet “Slaughter On Tenth Avenue” by Rodgers & Hart. The score is inspiring – a drama of highs and lows of intertwining beautiful melodies and ghostly movements evoking late nineteenth- and early twentieth-century American city activity and sounds.

The ballet’s use of the melody from “Three Blind Mice” was also a good fit – many people raised alarm about the dangers in the confiscation of the Corcoran’s collection, but the decision was made.