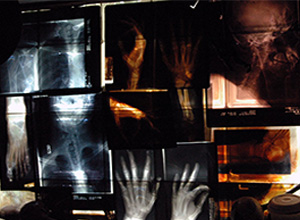 My studio is a simultaneous overlay of an art gallery, a performance space, a design office, a recording studio, a used record & book store and a pawn shop.

This space evokes the better elements of a New York loft, a Berlin nightclub, a London used book & record store and an LA pawn shop. All in a Washington cellar.

Make sure you check out some of the original music and video I composed while you're visiting. I wrote, recorded, shot, composed everything.

This is a Creative Environment

An extension of skin, bone, circuit boards, paper & vinyl, my work studio is a co-mingling of the obsolete and the cutting edge.

When I wrote this song, I was thinking of a 'Buck Owens meets the Rolling Stones in 1965 with the drummer from Blondie' kind-of-thing. Throw in some Buddy Holly too.

This song was performed here by one of my 1st bands, The Revellaires, released on Top Records.

Original Video: “Resolution No. One”

This was influenced by Salvador Dali, Man Ray, Edward Hopper and The Who.

The goal was to create something that reflected brooding mood and intensity, solitude and anonymity. I wanted to shoot and edit time-lapse footage with people and animals and nature.

Listen closely to the soundscape I built for it – all the water, wind & bird sounds are signals from shortwave and pirate radio stations.

Original Photography: Glimpses of this space in time-lapse

This time-lapse video has some nice interior shots of my studio over the years.

I wrote the soundtrack to this video. Play this loud - there is a smoking guitar solo....

...and make sure you check out the dancing bat.

All site content © 2021 John Carmody, Washington, D.C. including but not limited to: